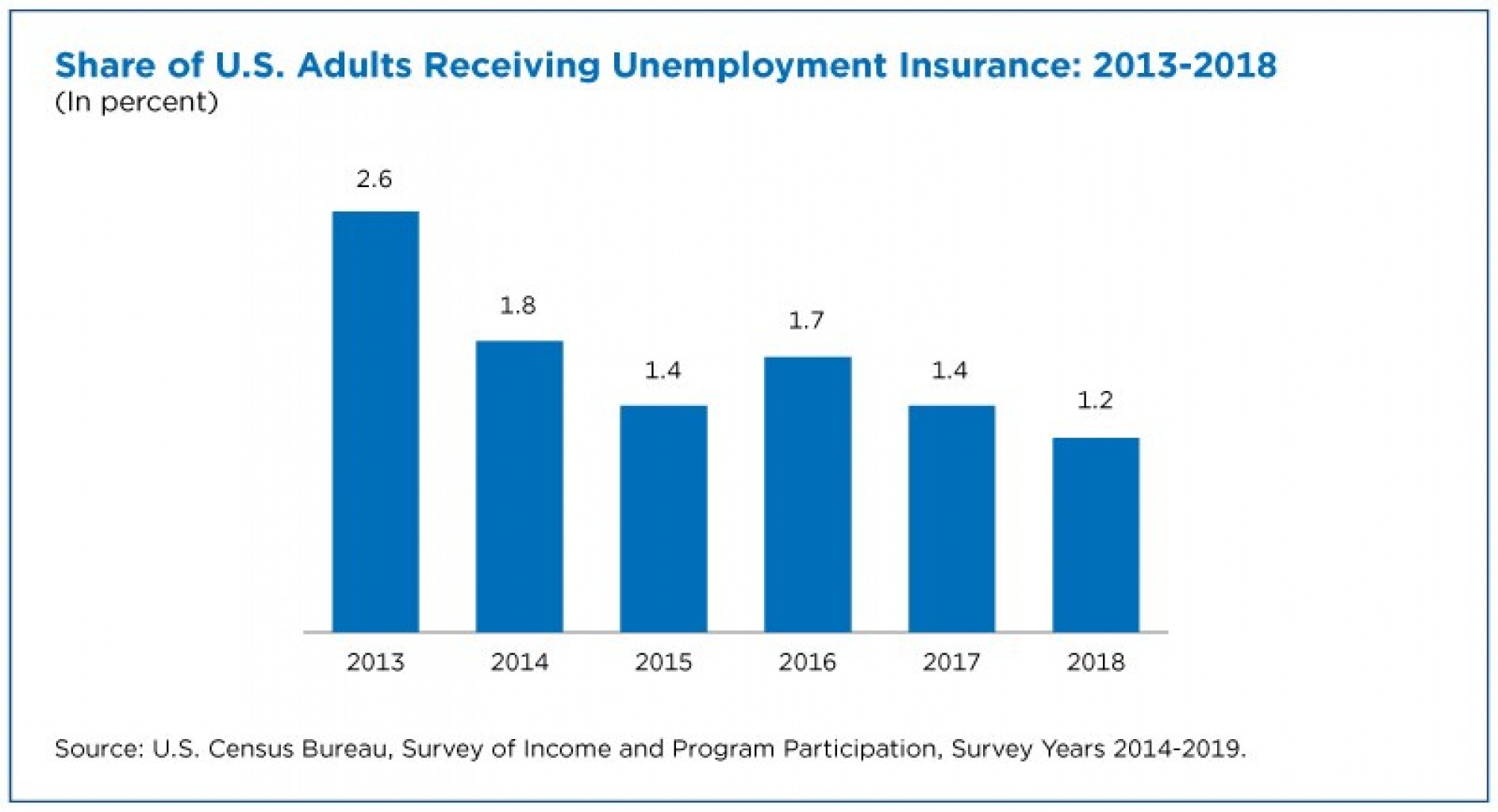 In 2018, the share of adults who received Unemployment Insurance (UI) at some point during the year reached a six-year low as the economy strengthened following the Great Recession.

Also, 7 in 10 adults who received UI at any point during 2018 received it for three months or fewer.

These findings come from tables recently released by the U.S. Census Bureau, detailing demographic characteristics of recipients of social insurance programs in 2018 captured in the Survey of Income and Program Participation (SIPP).

The newly released tables, combined with data from the U.S. Department of Labor and the Census Bureau’s experimental Household Pulse Survey (HPS), also shed light on how the COVID-19 pandemic reshaped the profile of unemployment insurance recipients.

Unemployment Insurance After the Great Recession

Often, Congress extends the number of weeks workers can collect UI during recessions, as it did during the so-called Great Recession from December 2007-June 2009. Emergency Unemployment Compensation (EUC) was available in some form from 2008 through 2013.

The following decade was a time of economic recovery. In fact, 2018 marked the ninth consecutive year of the longest post-WWII expansion, which lasted through February 2020 until the pandemic took hold in the United States.

The Great Recession unemployment rate peaked at 10% in October 2009, but the lingering effects of the recession and the availability of extended benefits under EUC were evident in elevated receipt of UI as late as 2013.

As the share of Americans receiving UI fell, more received the benefits for shorter periods except in 2015 (when the share of recipients of up to 3 months of UI was about the same as in 2013).

The federal government responded to the challenges of the COVID-19 pandemic by transforming the UI program.

The program underwent several temporary changes under the Coronavirus Aid, Relief, and Economic Security Act (CARES) Act enacted in March 2020. Weekly benefit checks were increased by $600 and the number of weeks of benefits available were extended.

Plus, it created the Pandemic Unemployment Assistance (PUA) program, allowing individuals who were not previously eligible for regular UI — such as workers with shorter work histories, self-employed workers, independent contractors, and gig workers — to receive benefits if their employment was affected by COVID-19.

What Happens After the Pandemic

Will UI follow the same trajectory in post-pandemic recovery as after the Great Recession?

Data from the Census Bureau’s experimental Household Pulse Survey (HPS) show that UI receipt remained high although economic conditions improved by the summer of 2021. By June 2021, 6.8% of adults in households reported receiving UI in the first half of 2021.

SIPP and HPS data also show that the profile of UI recipients changed in the wake of the pandemic-related economic disruption and changes to the UI program.

In 2018, about 30% of those who received UI had a bachelor's degree or higher, according to the SIPP. In June 2021, the HPS found that only about 20% of adults who reported UI receipt had at least a bachelor’s degree.

The living situation of UI recipients has also changed during the pandemic. The SIPP data from 2018 show that 15.6% of UI recipients lived alone. By June 2021, the HPS shows that only 7.0% of households that reported receiving UI that year were single-person households.